I get lot of questions about handwriting analysis and a lot of people who are cynics.  This does not veer me away from knowing that handwriting analysis is a real science.  I was 9 years old when I first read the books my mother had (and I still have them) and I even used what I read to hire my first nanny from another province through an agency.  They sent me three pictures and three letters.  This still blows my mind.  Amazing fact.  Of the three pictures, the one I chose to hire was the last one I would have 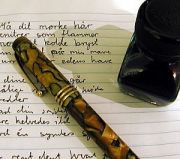 chosen had I gone by looks only.  She had purple short coloured hair and her picture looked like a mug shot.  But her writing, next to her other two contenders, both nice pictures, with nice smiles, and inviting, spoke volumes.  One of the contenders wrote very small, showing attention to detail, but she had no sign of people skills.  The other one wrote in so many slants, it was clear she wasn’t stable.  My choice was the one who showed balance of emotions (AB Slant), straight line, showing she was level headed, and not too large, but not too small of writing, meaning she was a people person, but not overly exuberant.  She also had an amazing amount of consistency in her writing, which led me to know that she would be consistent with my children.

This young lady stayed with us a year over her contract, and my children were torn when we had to say goodbye to her.  So was I.  I am glad to say that she learned enough English before she left to know she could communicate with others, got a great job when she returned to Quebec, and now is a mother, and I’m sure an amazing one considering how she was with my children, and me!

I miss her, although I do still keep in contact with her over our wonderful world of the Internet.

One main thing that I have to say.  This “level mind” that I saw in her handwriting, along with a reasonable “people person” characteristic was proven during one particular episode.  My youngest was at home and she knew he loved french fries.  She was making some for him for lunch but suddenly something happened (she cannot quite remember what it was, but neither would I have) and the pot caught on fire.  Her first reaction was to pour it down the sink and run water, but unfortunately the curtains above the sink caught on fire as she was doing this, and she then went to work.  She got my son out of the house and went to the neighbours to call 911.  From there she did something unfathomable in the eyes of anyone knowing if there is a fire – she went back into the house to get the dog out.  From there she called me at work.

When I arrived at the house, five gorgeous firefighters stood before me.  They had arrived in time to put the fire out before it spread to the rest of the home.  My poor nanny was crying and saying she would understand if I let her go.  I hugged her.  I told her that she was doing something for my son, did the right thing in making sure she took the proper steps even in a panic, and told her she should not have returned for the dog, however grateful I was she did, but her life was so precious!  Then to make her smile I told her it was all okay.  I got to see 5 of the gorgeous firemen that end up in the calendar each year and they were in my house.

I love that lady.  And I couldn’t have asked for a more perfectly stable person to care for my children.  She thought quickly, and followed by genuine remorse.  I couldn’t have asked for better.  I am a firm believer that had it been any of the other two, one might have freaked out having multiple emotions, and the other might have done the same, but would have held all the emotions inside.

To this day I thank my, then, my junior understanding of the value of knowing handwriting analysis.  I am now certified and going on to my Mastery.  And with each and every day I learn more.

At this point in my life it’s important that I know too who I might date in the future.  I am 50.  I always ask for handwriting before I move forward.  I do a compatibility review and thus far there hasn’t been anyone that I know that I could deal with their character issues.  But on the other hand, I’m happy single, so I’m not in a hurry to find that right person.

Cynic?  You are allowed your opinions, but so far I have not been let down in using this science whatever the circumstance.

I AM That Gal

I AM That Gal

Make Up Not Required

Make Up Not Required

I Appreciate Feedback On My Google Page!

I Am That GAL Team